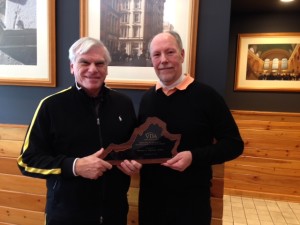 Dr. Viglione was recently recognized by the Virginia Dental Association for his contribution to dentistry and service.  At the Fall gathering held at the Greenbrier, Dr. Ted Sherwin, President of the VDA presented him with the Manny Michaels Distinguished Dentist Award.  This is given to a dentist who demonstrates outstanding service, leadership, and dedication to the profession of dentistry and for the improvement of the health of the citizens of Virginia.

“This year’s awardee was a born leader as seen in his many leadership roles.  He was Class President of his senior High School Class and Captain of his State Champion Football team.  He was also Class President and elected to the Omicron Delta Kappa National Leadership Fraternity at the University of Richmond.

He served three years in the Army before settling in Charlottesville where he quickly became President of his Parish Council and led a major building campaign.

He also began his early leadership commitment to organized dentistry while serving as President of the Charlottesville/Albemarle Dental Association, then President of the Component 7.  He served at the state level as chair of the Peer Review Council and member and chair of the VDA’s Executive Committee, as well as an alternate delegate to the American Dental Association.

He is a loving husband of 46 years, a dedicated father to 3 daughters, and a grandfather.

He is a selfless and deeply spiritual individual.

He helped his church to start a medical clinic and later a dental clinic in Haiti.

He has participated in many MOM projects including Katrina.  He served on the Board of Ronald McDonald House and the Free Clinic.  He served as the Founding President of a Charlottesville effort to provide dental services to the underprivileged.  He received the Virginia Healthcare Foundation’s Unsung Hero Award.

Those of us who have been lucky enough to have a great mentor realize, especially with the passing of years, how fortunate we are and how our success is blessed by this friendship.  So it is for men and MY mentor, the winner of this year’s Manny Michaels Award, Bill Viglione.”